Music, Communication, People, Photography, Sport, Food and Wine,
everything in the open air or under the sky. 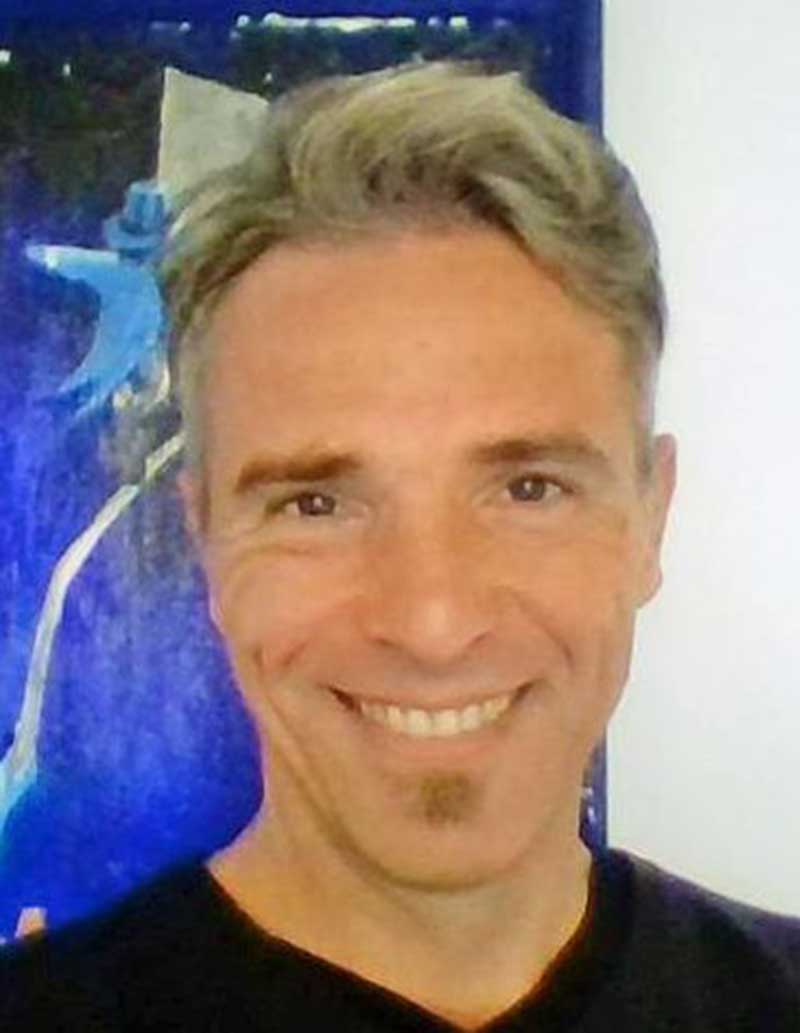 Marcello Balestra born in Cesena on November 24 class 1966, one of the most representative Italian Creative Manager, is a prolific creative Art Director
In 1980 at Tremiti Islands, he knew Lucio Dalla and began getting in with the recording studios Fonoprint in Bologna, during the realisation of the most well-known italian artists of that period and where he took notes on the bolognese singer-song writers: Luca Carboni, Lucio Dalla, Stadio, Ron ecc.

In 1983 Lucio Dalla published the album "1983" which portrayed on its sleeve, the historical band of Longiano (FC) Balestra's native country.
This was the beginning of the official cooperation with Lucio.
Afterwards, Balestra toured as Road Manager from 1986 to 1989 for the Smemo Music, the artist's agency, till the worldwide tour Dalla-Morandi.

In 1989 Balestra became Publishing and Legal Editor In-Chief of the label Pressing srl (Lucio Dalla's label), of Assist ed. musicali Spa and of Damaluma srl (sound trak company of Dalla and of the producer Mauro Malavasi).
From 1990 to 2011 Balestra was Creative Publishing Director and Producer of all recording productions: Dalla, Bersani, Morandi, Baraldi, as well as of the young section (more than 5 millions of records sold beetwen 1990 - 2001 including the best seller album "Cambio" and "Canzoni" by Lucio Dalla) and of soundtracks for cinema and television always for the Pressing Assist and Damaluma, such as "Mamma Lucia" with the arrangement of "Caruso" performed by the Master Luciano Pavarotti.
Thanks to his artistic insight and research, Balestra suggested Dalla to perform and include the unreleased song "Ayrton" by Paolo Montevecchi into his album "Canzoni".
The unreleased song "Ayrton", discovered by Balestra in 1994, later published by Dalla, has become the symbol song in memory of the great Ayrton Senna.
1998-2001 University Professor in Discography and Copyright at the European School of Economics.
Since 1990 Balestra took part in the most important italian exhibitions for young talents, as talent-scout, observer, art-director, jury president or jury member: from Festival di Castrocaro to Sanremo Giovani, from Amici to Destinazione Sanremo, from Musicultura to Premio Lunezia, from Contursi Festival to Festivalshow, fron Sonda to Tim tour, from Area Sanremo to Ti lascio una canzone ecc.
Nel 2008 he took part as record maker at the final stage of "Amici" as well as to the other television programme on young talents.

Marcello Balestra, one of the most representative Italian Creative Manager, is a prolific creative Art Director and experienced in:

University Professor in
Discography and Copyright

In 2006, Balestra suggested the editorial staff of "Amici" by Maria De Filippi, to introduce the unpublished songs into the challenges and into the compilation of the young finalists of "Amici", following then, the production and publication of compilation of the edition 2007 "Bianco e Blu" and that of 2008 "Ti brucia" which got gold and platinum disks.
Balestra became judge as record maker for the TV programme "Amici" from 2009, 2010 to 2011. In 2008 he signed Marco Carta as Artist and Carta, in 2009, won The Sanremo Festival with the song "La forza mia".
In 2009, not only Balestra defined Emma Marrone "Tu si na cosa grande" but he also asked "Amici" if he could sign her as Warner .
In the same year, Balestra signed Luca Napolitano and a year later, 2010, Annalisa.

In 2007 Balestra recommended Noemi as the best young singer among the 40 finalists and asked the producer Diego Calvetti to sign her as Warner Music even if she will not go to the Festival.
In 2008, he signed Arisa telling, he would have signed her even just for her character and congeniality.
Always in 2008 he signed Simona Molinari, followed by Renzo Rubino in 2012 and Mirella Nyvinne Pinternagel in 2016.
Mirella was among the 70 finalists and nowadays, she is Artist and Authoress Sugar of Caterina Caselli.
With the finalists of Area Sanremo 2014, Balestra produced the Cd and Video of the track "Siamo tutti remi" by the author Sla affected Omar Turati, published by Lucio Dalla's Foundation in favour of research on Sla during the Sanremo festival 2015 when the host Carlo Conti talked about the project worldwide broadcast before declaring the three finalists of the Sanremo festival.

In 2009 Balestra introduced the compilation "Ti lascio una canzone" and published, getting a great achievement (double platinum) for Warner Music the album of the editions 2009-2010 of the successful programme by Roberto Cenci hosted by Antonella Clerici and produced by Ballandi Entertainment.
Balestra suggested to the programme's artistic production to sign as Warner Music Italia, the first recording project of the three lyric tenors, then become Volo: Gianluca Ginoble, Ignazio Boschetto and Piero Barone.

From 2001 to 2014, at Warner Music Italia, Balestra was at the stage management of CGD and from 2004 at the stage management Warner Music Italia with millions of album and single sold.
In this period he has also signed for Warner Music Italia: Giusy Ferreri (2002), Riccardo Maffoni (2003) who will win the Sanremo Festival Young 2006, Sugar Free (2004) creating their artistic project and the video "Cleptomania", super hit 2005.
Always in 2005, Balestra is the project creator of the hit song "Goldrake" with Alessio Carraturo. In 2005 Balestra signed the "Baustelle" leading the album "La malavita" and their following album to success, then he signed Paolo Simoni (2005) who will take part with "Mala Tempora" among the finalists of Premio Tenco 2007.
In 2006 he signed Fabrizio Moro who will win the Sanremo Festival 2007, in 2008 Arisa who will win the Sanremo Festival young 2009 and Marco Carta who will win the Sanremo Festival champions 2009, winning as the only one label for the Warner Music Italia (never happened in the history of the Festival) both categories. Always in 2008 Balestra signed Simona Molinari leading her to success together with Peter Cincotti with the song "La felicità" whose inspirer, artistic director and production manager was Balestra.
In 2010 he signed Annalisa, in 2012 Renzo Rubino and published the album "Work in progress" by Dalla-De Gregori ( Dalla's last album, but Lucio is always close to us), in 2013, Balestra signed Raige and Ensi.
Balestra followed and published for the Warner Music Italia the projects of the following arts:
Irene Grandi, Raf, Umbereto Tozzi, Paolo Vallesi, Laura Pausini, 883-Max Pezzali, Nek, Luca Napolitano, Fabrizio Moro, Syria, Sugarfree, Riccardo Maffoni, Arisa, Marco Carta, Simona Bencini, Baustelle, Nomadi, Giorgio Gaber, Renzo Arbore, Pooh, Annalisa. Simona Molinari, Peter Cincotti, Renzo Rubino, Paolo Simoni, Vinicio Capossela, Dalla-De Gregori, Amici, Ti lascio una canzone.

Since 2014 Manager of Pressing Line (Lucio Dalla's Historic Label) for the development of the list, of the young artists and advisor for Lucio Dalla's Foundation, based on Dalla's image projects and solidarity.
In 2015, Balestra had the idea to mix Lucio Dalla's language with that of rapper's, so he realized and published for Pressing line "Bella Lucio" eleven songs which revisit Dalla's song: (Rocco Hant, Clementino, Art.31, J-Ax, Raige, Ensi, Mondo Marcio, Emis killa, Ghemon, Siamesi Brothers, Moreno, Two fingers) with the pruduction of the great Franco Godi of Best sound.
Audience and critics have considered "Bella Lucio" an apochal album because it is unique of its kind. Balestra, always for Pressing Line, has realized the showcase for young people "Alla finestra" and the project "Discovering Dalla" to revive some Lucio Dalla's songs by cover of nowadays young talents. For Lucio Dalla's Foundation on the 4 march 2016, Balestra succeeded in bringing for about two months, under Lucio Dalla's house, in de' Celestini square (BO), the famous "Statua panchina di Lucio Dalla" by the sculptor Carmine Susinni with a great audience and critics achievement. On the famous bench, a lot of artists and people took photos, so did Fiorello.

Balestra producer and format author adressed to social activity too, follows with joy and passion artists affected by diseases partially disabling who have got talent and desire to show themselves as human and artistic model of great communication substance.
On Gennuary 2016, Balestra's creative genius sets up "Casartista", a philosophical and practical project which deals with the natural development of the human being as artist.
This philosophy tries to bring the human being and the natural expression to the center of human and artistic communication as common person or artist.
A very ingenious philosophy which is the result of a long gained experience, about 30 years of passion and work among highly cultured artist or people only longing for success.
In April 2016 the brench office takes shape in Milan to follow the currently activities,those in progress and the trasversal projects beetwen music and communication.
The brench office is nearby the Fondazione Accademia di Comunicazione, 112 Savona street Milan. On August 2016 Balestra achieves at San Vito Chietino (CH), the first edition "Palco dei sogni" a festival thought up and restricted to young artists chosen on the national territory.
Edition echieved with Marta Bucciarelli.
On August 2017 Art Director of Contursi Festival, Balestra introduces the Pop Star category to point out in Italy, young artists able to interact with the audience through the contemporary art forms: singing, dancing and performance. With the contribution of Stefania Coralluzzo.
The passion and the total commitment seeking for new forms of artistic and communicative inclination, writing and searching for new format and songs of potential success, supporting and reinforceing artistic career, are daily bread of Balestra who, likes surprising himself everyday, as long as the surprise is authentic, human but above all artistic!!